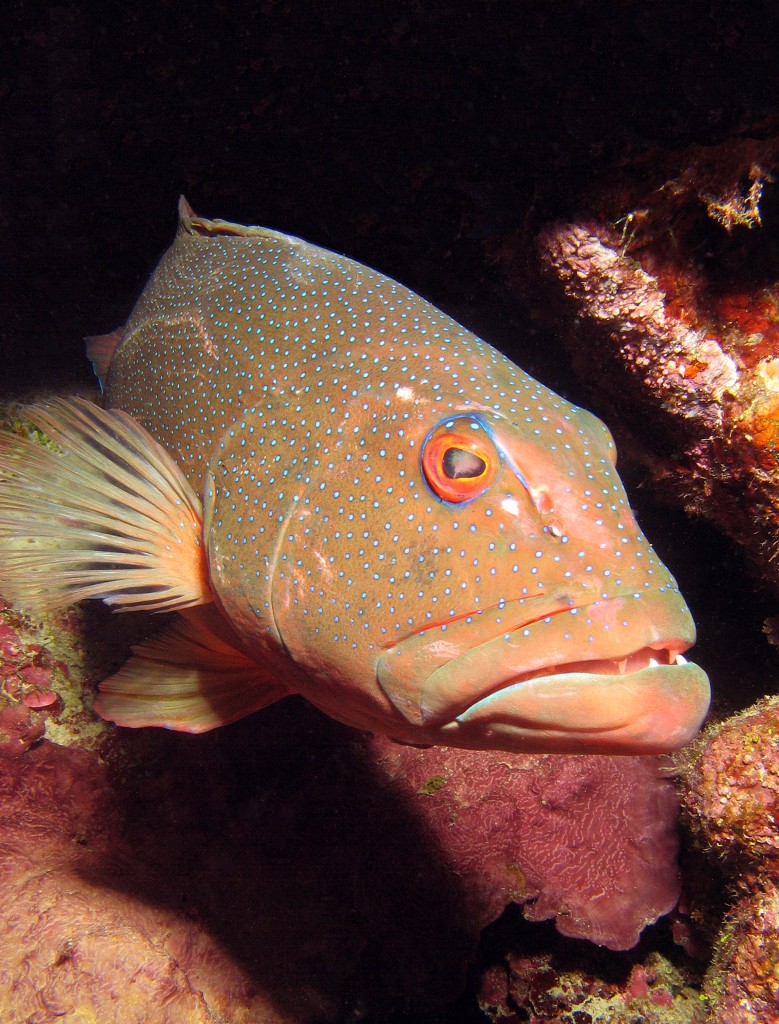 Enter any seafood restaurant during your stay in Cairns and you are likely to find Coral Trout on the menu. The firm pearly white flesh is considered to be the finest eating of all of our reef fish.

Coral Trout are generally pinky/red in colour with a dense scattering of electric blue spots, though individuals from shallow waters are more likely to be Olive/Brown in colour. Don’t be fooled by the name however, the Coral trout is not a trout at all. These fish are actually a member of the Grouper and Cod family possessing a large mouth and sharp conical teeth.

Coral trout are an ambush predator that lurks in the shady over hangs and crevices of the reef employing an explosive rush to capture prey. They feed on a variety of reef fish species from tiny Hardy head bait fish to sizable Parrott fish. The difference in colour between individuals is a camouflage strategy with pink more suited to the duller light conditions of deeper waters. In the absence of the red wave lengths of light at depth the pink colour makes the fish appear olive brown in colour which is ideal for hiding in the shadows. Look for the Coral trout lurking below dense schools of bait fish when you are diving or snorkeling on the Great Barrier Reef.

There are 4 species of coral trout found commonly on the Great Barrier Reef with the most obvious difference between species being the size and shape of the spots. A relatively fast growing fish Coral Trout achieve a maximum size of 120cm and a weight of 26 kg by which time they would be 16 to 18 years of age. Growing to 20cm in their first year coral trout mature sexually at 2 years of age at a size of 30cm. The minimum legal size at which coral trout can be kept by a fisherman is 38cm at which time they would be close to 4 years old.

Though this may sound a little weird the coral trout begins life as a female before changing sex at 4 to 6 years of age to become a male. Sex change in reef fish species is quite common and involves hormonal rather than physical changes. This strategy allows populations to optimize the female/male ratio maximizing reproductive output. Coral trout spawn during the late spring (September to November).

Coral trout are the dominant species in the commercial reef line fishery and one of the prime target species for recreational anglers. Economically Coral trout are one of the most valuable fish species on the Great Barrier reef with a commercial catch of 1500+ tones per year. The management of this fishery is seen as priority by the management authorities involved and uses world recognized best practice strategies including reef closures, spawning closures and bag limits to ensure the sustainability of this fishery.