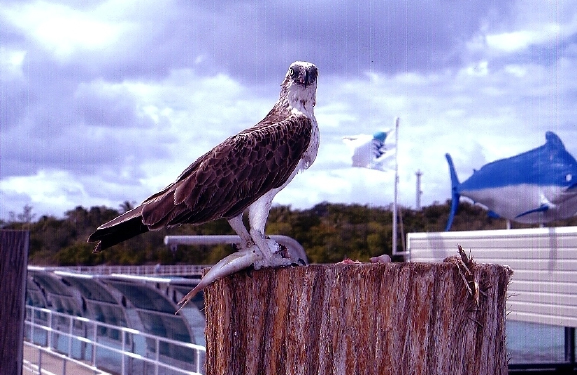 Ospreys (sometimes known as the sea hawk, fish eagle or fish hawk) are fish-eating birds of prey that make the Great Barrier Reef their home. They are found on all continents except for Antarctica.

Typically an Ospreys diet consists of 99% fish and over time have developed sharp spicules on their feet to help grip slippery fish, unlike some other sea birds who use their beaks for catching. Their strongly muscled legs allow them to carry fish that weight up to 2kg – which is more than the bird itself weights!

Ospreys will build their nests in forks of trees, rocky outcrops, on top of utility poles, buoys and occasionally ship masts. Mating pairs of osprey stay together for life. On Green Island for example there is a couple that have lived and raised many offspring over the years.