Reef Biosearch, the environmental division of the Quicksilver Group, was founded in March 1986 – in an era before the term “ecotourism” was even spawned.

Originally the brainchild of marine biologist Wendy Morris, Reef Biosearch’s aim from day one has been to combine tourism, education and research. In the early days, this was by way of providing an educational slideshow to passengers and chatting to them about the reef. All these years later our guiding philosophy still remains the same; environmental awareness and conservation starts with education. Today, Reef Biosearch continues to contributes to vital and ongoing Reef research and with a team of up to 10 fully qualified marine biologists, is dedicated to turning the ocean into a classroom and educating guests about this magnificent watery wonderland. 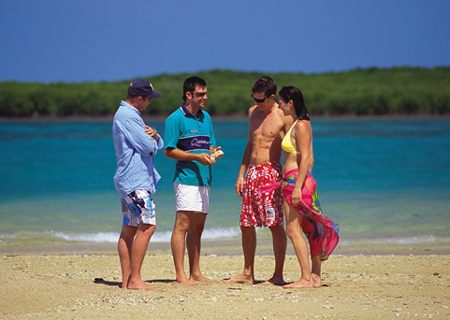 Significantly, Reef Biosearch has the longest logbook database of marine observations on the Great Barrier Reef, ongoing for nearly three decades. This information allows scientists to observe trends and changes in the marine environment and to allow the Quicksilver Group to manage our site usage to preserve our environment. This database has evolved into the GBRMPA’s (Great Barrier Reef Marine Park Authority) program “Eye on the Reef”, which has been embraced by the region’s marine operators.

Over the years, Reef Biosearch has been involved in many noteworthy research projects including:

With our focus on education we participate at all levels within our community.

Since Reef Biosearch started, more than 70 marine biologists have worked with the company providing a firm foundation to career opportunities and development in the broader community and ensuring our premise of environmental education, conservation and preservation is continued.