(note: Humpbacks have in the past swim around snorkellers at Agincourt reef and other dive sites. Very few operators have a lience to approach the whales, Silversonic is one of those)

Humpback whales regularly migrate from Antarctic waters along the east coast of Australia every winter. They can be seen on the GBR between the months of June to September. They annually migrate to warmer waters to mate and give birth. These giant leviathans are found in both hemispheres, but rarely (if ever) cross the equator, creating 2 different races. Their numbers along the East coast of Australia were decimated for about 100 years, but whaling was stopped in 1962 (more so from the industry being unviable than any government intervention!). Since that time, numbers have steadily increased. 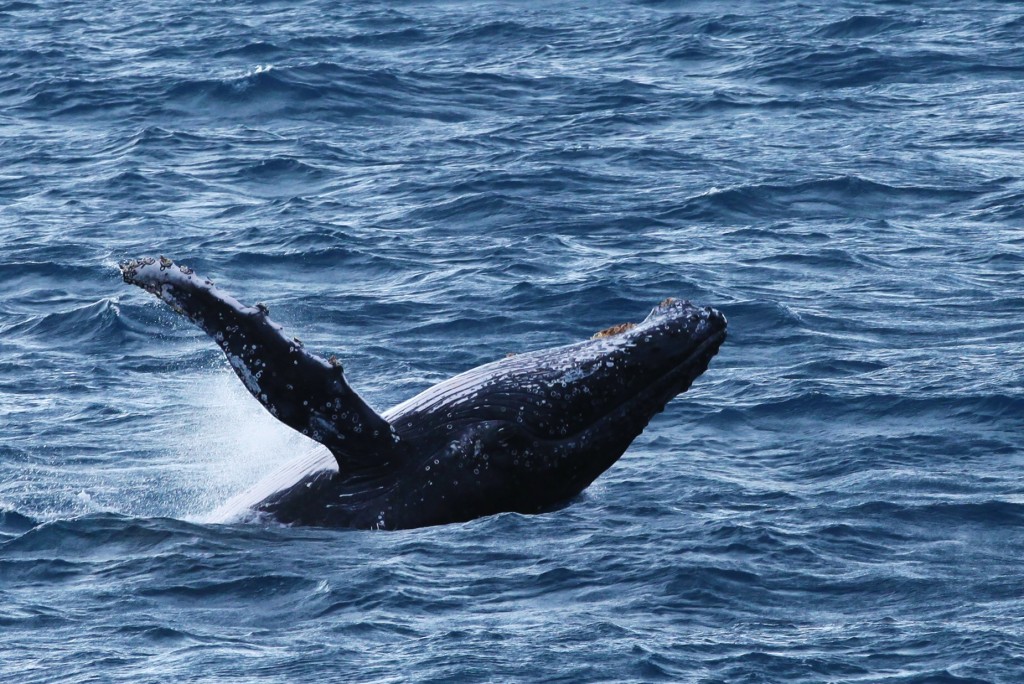 Male humpbacks produce “songs”, which are believed to attract females at mating times (although there have been records of songs in summer, the non breeding season). The songs comprise a magical mix of clicks, moans and eerie wails. These songs can have distinct patterns, and can last for over 20 minutes, with the whale only pausing to take a breath. The same song will often be repeated for hours on end. Females are not known to vocalize.

Humpbacks can display a wide range of behaviour, such as:

Tail slapping: This is where they slap their tail on the surface. It can be a form of communication, but more often then not it is an aggressive display.
Spy Hop: Humpbacks will often surface vertically, and actually stick there head out of the water so that they can see above the waterline. There is nothing like being eyeballed by a 15m whale!
Bubble Netting: A technique developed to allow whales to entrap their prey (krill) by creating a ring of rising bubbles. The whale then moves through the net and uses it’s baleen to trap the prey.
The Blow: Often the first indication that a whale is in the area. The vapour cloud produced is caused when the whale empties its lungs, and can be quite pungent if you’re downwind!
Breaching: The most spectacular display of all, where the animal leaps almost clear of the water, creating the kind of splash that only a 40 tonne animal can produce!