Turtles of the Great Barrier Reef 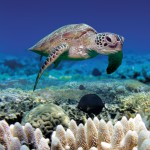