Dugongs of the Great Barrier Reef 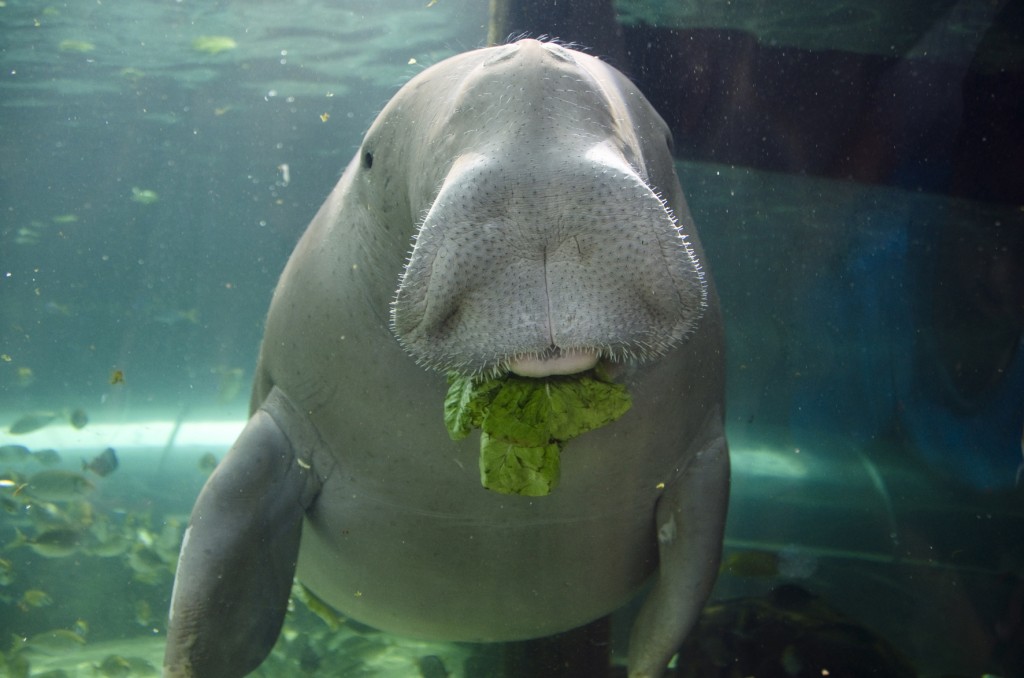 Dugongs are the only strictly herbivorous mammal in Australia, and are found throughout the Indo-Pacific region. In Australia, they are found across the tropical belt, feeding on shallow seagrasses (approximately 40kg per day). They reach a length of 3m, and can weigh as much as 400kg. They resemble a large dolphin, but lack a dorsal fin, and have an upper lip covered in thick bristles. Early sailors are believed to have confused dugongs for mythical mermaids, indicating that those men had been at sea for too long, as the dugong has a face only a mother could love!

Dugongs share a common ancestor with elephants, and are most closely related to the manatee, their northern hemisphere relative. They are well designed for aquatic life, with nostrils situated on top of their heads (so they can breathe), and have a large, strong tail that propels them through the water. Their eyes and ears are on the side of their heads. Although their eyesight is poor, they have an acute sense of hearing.

They have few predators, besides sharks, crocodiles and man. Dugongs were hunted to the edge of extinction in the early part of last century by Europeans for food and oil. These days, dugongs are under pressure from other activities, such as loss of habitat, boat traffic and being caught in fishing nets.

Recent research has shown that some dugongs can travel vast distances to new seagrass meadows, and return to their old haunts, whilst others move very little. One reason proposed for this is that some young are shown these remote meadows by their mothers, whilst the ones potentially orphaned early in life stay close to the regions they were born.

Dugongs reproduce slowly, producing a calf only every 4 or 5 years. This low breeding rate and relatively long life span (up to 70 years) means that they are susceptible to environmental changes and pressures. In response to these pressures, the Queensland government began establishing Dugong Protection Areas (DPAs), which rely on the fact that there is no illegal fishing in those areas. Dugong numbers around the top of Australia are believed to be close to 80 000.