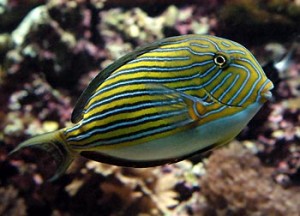 Surgeonfish (or Tangs) are found throughout the world’s temperate and tropical oceans, and there are approximately 80 species, many of which are found on the Great Barrier Reef. The body is basically flat, and oval in shape, with a small mouth for grazing on algae (although some feed on zooplankton).

They get their name from highly modified scales that have evolved into weapon-like spines at the base of the tail. These spines are either fixed or mobile (like a flick knife) and there can be up to 6 per side, depending on the species. They are mainly used when the fish feels threatened over territorial disputes, but fishermen have often been slashed when removing them carelessly from nets.

One species, the mimic surgeonfish, has a unique strategy, where the juvenile assumes the colours of angelfish (colours that are good for camouflage). When the fish becomes larger than the angelfish, and it no longer needs the protection, it changes colour so that other mimic surgeonfish know that it is a reproductive adult.

Within the family is a group called the Unicorn fish. These intriguing creatures are so named because of the enlarged proboscis or “horn” that emerge from their foreheads. It’s believed by many marine biologists that the horn is used like a rudder, so that these unicorn fish can maintain their position in the water currents when they are feeding on plankton. 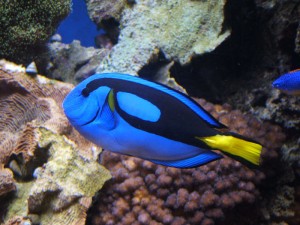 Like some other families of fish, they have the remarkable ability to change their colour according to their mood. The presence of a predator can cause a near instant change, and when they sleep at night the colour can change again (often referred to as the pajama colour). Also, within species variation can be found (the yellow tang is bright yellow around Hawaii, but can often be more brown in other locations).

The males of most species go through another colour change when they are about to spawn (which occurs during a full moon). All sexually mature fish form large swarms, and get highly agitated. They quickly release their eggs and sperm, and the fertilised eggs float to the surface of the water (they do this due to the presence of a tiny bubble of oil, which makes them positively buoyant). The eggs hatch within a day, and feeding generally commences within a week.

The most well known surgeonfish is the blue tang, made famous by that goofy character Dory, from “Finding Nemo”. Blue tangs are generally found on the seaward edge of coral reefs, or on the corners, as they prefer high current areas. (Images courtesy & copyright GBRMPA.