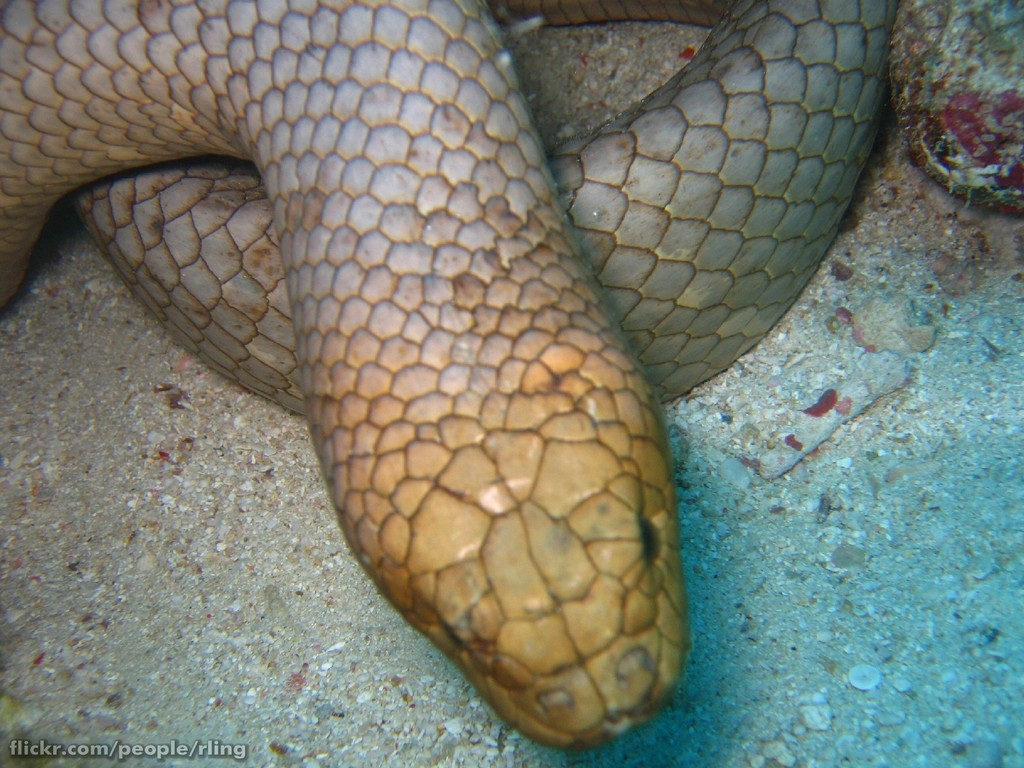 How many species occur along the Great Barrier Reef?
Around the world, there are nearly 60 species of sea snakes. 14 species are found along the Great Barrier Reef, including the large Olive sea snake, and the black and white banded sea krait. It is thought that sea snakes evolved from Australia’s elapid (front fanged) snakes about 30 million years ago. Today, there are 2 distinct groups, the Laticaudids and the Hydophiids.

What adaptations make them special?
To aid swimming, their tails have evolved from a long, cylindrical shape to a paddle shaped structure, which allows them to use their natural undulating movements. Because they often spend long periods (30 minutes to 2 hours) foraging on the sea floor, their lungs are greatly modified. One lung extends nearly the full length of the snake, and is very efficient in gas exchange. Also, they are able to extract oxygen from the sea water through their skin.

Sea snakes have a gland under their tongue which allows them to excrete excessive salt. Lastly, they have to shed their skins (sloughing) more regularly than land snakes, as they are more prone to fouling by other marine organisms, such as barnacles and algae.

How do they reproduce?
Breeding is conducted in the ocean, which in itself produces a few problems. Couples will form during large aggregations, and the snakes will intertwine. Reproduction can last for hours, and the female controls when they surface to breathe (so the male better be nice!). Due to the shape and design of the male snakes’ penis, the male is unable to disengage from the female until mating has finished.
Females go though a gestation period between 4 and 11 months, and the young are born alive and underwater (except for the laticaududs, which go onto land to lay eggs). Once born, they must be able to fend for themselves as there is no parental care.

Sea snakes are all incredibly venomous, but are usually very placid and reluctant to bite. The only time they get really inquisitive is when they are breeding. It is not known why they aggregate in large numbers on some reefs and are rarely seen on others.

Another common story is that “sea snakes can’t bite you, as they have very small mouths”. This may be true for some species, but the majority are certainly capable of delivering a dangerous bite.