Along the length of the Great Barrier Reef, there are over 35 species of marine rays. Rays play a very special part of Australia’s early discovery by Europeans. Lieutenant James Cook recorded numerous large rays caught in Botany Bay (so many, in fact, that Cook originally named it Stingray Bay).

Rays are generally broad, flat fishes that have evolved from sharks, and as such, have a cartilaginous skeleton. Like sharks, they have open gill slits, spiracles (holes for inhaling water) and all exhibit internal fertilization. The majority of species have evolved a bottom dwelling life, using their highly modified crushing jaws to feed on molluscs.

The most well known part of a sting ray is the tail. This structure is usually no more than a flimsy filament, although in some species it has evolved to be a more robust tool. Many species (but not all) have a dangerous and poisonous barb, which is only used in self defence. The barbs have been used by aborigines as the tips for spears for thousands of years. These structures are intricately designed, and very difficult to remove without causing major tissue damage (stories circulate about fishermen having to push the barb all the way through a limb to remove it!). Also, there is toxic venom around the barb that can cause complications.

Of course, the chances of a nasty encounter with a ray whilst swimming around are about nil, as the animal will always retreat unless trapped or physically disturbed. Like all creatures on the reef; observe and enjoy! 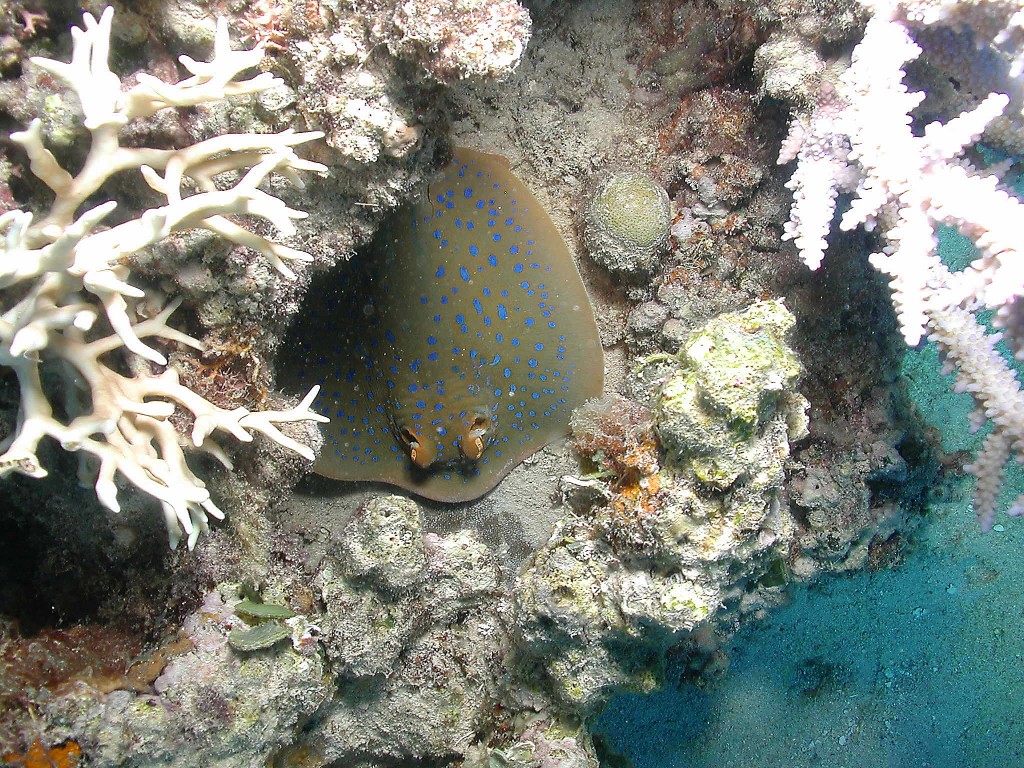 The most commonly seen ray is the blue spotted lagoon ray, which reaches a disc length of 50cm. It is usually seen half buried in the sand with only the eyes protruding. The thorny ray is so named due to the extremely rough dorsal surface. It also has an unusually short tail with no stinging spines.

Eagle rays are a diverse group that are much broader than they are long. They produce 2-6 young at a time, and are well known aerial acrobats, leaping out of the water to considerable heights. They spend a lot of their time in groups near the surface of the water, but still feed on shellfish on the sea floor.

Another group not instantly recognized as a ray are the guitarfishes. They have 2 large dorsal fins, and a shark shaped torso, which confuses some fishermen. They can reach over 3m in length, and are quite inquisitive, and will approach divers underwater.

The most impressive of the rays, in appearance and size, are the devil rays. The largest ever specimen reliably measured was over 9m in width! They have extensions of their pectoral fins, called cephalic lobes, which look like horns on their heads (hence the term devil rays). These are believed to aid the collection of plankton, which they feed upon. Their tails are short and filamentous, and most species in the group lack a spine, such as the beautiful Manta ray.