Sharks of the Great Barrier Reef

One of the many questions the marine biologists get asked on the reef is “Will we see any sharks today?” The answer is it is distinctly possible, but probably not the species that most people immediately consider. Chances of encountering a tiger shark or a hammerhead are very slim, but the lagoon waters and reef edges are home to a large range of species, such as the black tip shark, the grey reef whaler, and the most commonly seen of all, the white tip reef shark.

The world’s oceans are home to over 370 species of sharks, half of which occur in Australia, and the great majority of these are completely harmless to humans and less than 2m in length. Sharks have been around for over 400 million years in a relatively unchanged form (when you’re on a good thing, stick to it!), with some fossils dating back to the Silurian period. Sharks differ from other fishes by having a cartilaginous skeleton instead of a bony one (a characteristic that they share with rays) and exposed gill slits.

Read more Information on Sharks Below:

Sharks of the Great Barrier Reef 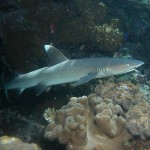